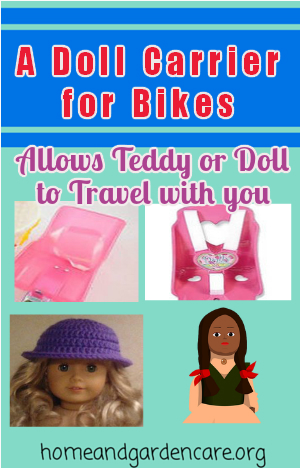 If your little daughter has been asking you for a doll carrier for bike attachment then I would suggest doing a little homework before simply jumping on board and filling in your order.

Of course it’s not surprising that she would like one as she may have seen other friends with a doll bicycle seat attached to their bikes. There are options available where you can buy the doll seats as bike accessories and attach it behind the cycle seat and above the rear wheel.

Other options that are available have come as part of the bike design and are installed at the factory.  Obviously it’s not everyone who lets say, has just found and bought a bike for a two year old will splash out on another bike just for this feature so the add-on version sounds like a good alternative.

The factory built versions are more stable being built with the purpose in mind of creating a seat that does what it was designed for. Very often there are stability rods that support the seat to stop it bouncing around when a doll of a bit of weight is placed in it.

On the other hand add-on doll seats are not as stable as the factory built bike complete with the bike doll carrier. Although the upside is that they are by far the cheaper option.

The Ride along Dolly comes complete with typical girl themed decals to decorate the doll bicycle seat and a seat belt to hold the doll in the seat.

Well that’s probably the facts out of the way because I fail to see where the rest of the description is going. There are some points that I just don’t get.

“Attaches to the seat post” – no it doesn’t it attaches to THE SEAT STAY as is clearly seen in the images that are supplied.

“It does not matter if you have a rear brake or not” – this is not what users are saying. Read the full review here

. Or perhaps it depends on what type of brakes are fitted.

The reviews for the Ride along Dolly are not as bad as you would have expected with a rating of 4.0 from 5 stars coming from the 287 users who rated it.

Here are some of the comments related to the doll bicycle seat which are very mixed.

“Will not work with bikes with hand brakes”

“BOTTOM LINE: easy fit on toddler bikes, for youth bikes check the location of the back crossbar bolt/hole before ordering to avoid being disappointed”

“It’s perfect! My daughter takes her Dolly everywhere with her”

“It was too small for her doll”

Dolly Come Ride with Me Seat 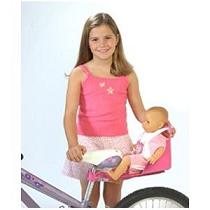 The main difference with the Dolly Come Ride with Me Seat is the method of attaching it to the bike. This one does what it says and is attached to the SEAT POST with a clamp.

There are Velcro straps to hold the doll in place and reflector tape on the back of the seat making the bike a bit more visible.

Meaning it may need the child’s seat raised to give a taller seat post position to attach the clamp onto, which will give the clearance required.

Ratings for this doll bike seat are a half point less than the previous version at 3.5 from 5 stars which came from 105 users.

Some related comments for the, Dolly Come Ride with Me Seat.

“I bought this for my 5 year old daughter. She was ecstatic”

“What a novel concept this is! Too bad it’s a piece of junk”

“I supported the seat with 3/16 solid rod down to the training wheel bolts and seems to be great. The kids love this for their American girl dolls”

Again very mixed and the same thing that applies to both models is that you can sense a feeling of frustration coming from those who purchased a doll carrier for bike attachment from either of the suppliers. Read more here.

Which Doll Carrier for Bike Version

Not a great deal of difference really in the fitting areas although there are a couple of points you need to take into account before deciding on which baby doll bike seat to attach to your daughters bike.

Bear in mind that both are made from cheap materials and you may agree with a few comments from users that think they are overpriced. But how can you put a price on keeping that young lady happy and anyway they are not all that expensive.

Quite surprised that these carriers haven’t cropped up in the Hello Kitty bike accessories yet, no doubt their fans will be demanding it soon.

The main problem arises in the fitting and probably more important, the type of bike your young one has.

It seems that the hole on the seat stay (located behind and below the bike seat) where the doll seat is attached can often be used for securing the hand brake or the mud fender. If this is the case with your child’s bike then you may want to rethink your choice of what doll carrier for bike you go for. The second version might be the better option.

2) Dolly Come Ride with Me Seat

This bike doll carrier is attached to the seat post which will have to be raised enough for the clamp to be attached in order to provide enough clearance for the rear tire. So if your kid is riding a bike that she is a bit too small for at present and the seat it set at its lowest point, this option is not for you. Perhaps option 1 might suit your circumstances better.

One clever person found one answer to improving the stability of the baby doll bike seat was by adding a solid rod from the doll seat down to the training wheels. Perhaps the makers could improve these 2 versions by adding supports that attached to the rear wheel spindle and were adjustable to suit different bike wheel sizes.

OK, it would cost a little more for an improved product. But after reading through what customers have been saying I think they would gladly pay the additional cost as their daughters are really delighted with the concept.

Parents already pay extra for bike helmets and matching sets of helmet and pads to make sure that their young ones don’t get injured. So the little extra on something that gives so much pleasure to the kid is money well spent.

Until then I’m afraid we will just have to be inventive in making adjustments to whatever baby doll bike seat we plump for, or just hope the kid gets enough use out of it before she tires of the idea.

As mentioned earlier I could only find 2 versions of doll carrier for bike attachments. Although, I do see a package of products which would work out cheaper if that interpreted anyone. Click Here to See More Choices