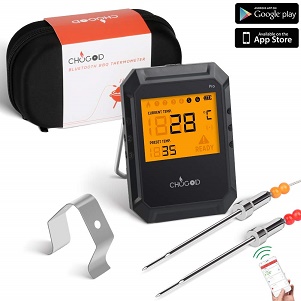 There’s nothing like cooking up a delicious steak or chicken in the oven or on the grill. It’s a great way to cook food for family or friends at a gathering. But not all cooking methods work to get the temperature right and why we recommend using a Smart Bluetooth food thermometer with 2 probes. Two is always better than one in this situation.

When a Smart food thermometer is not in use, you stand a good chance in overcooked the meat, (even if you’re standing right beside it while it cooks). You might even end up with meat that has portions of it that are undercooked if you don’t judge the time and temperature correctly.

Sometimes recipe cooking times are just plain wrong – and that’s a problem. You don’t want to risk anyone’s health by giving them undercooked meat. When the meat doesn’t cook the way that it’s supposed to, then you end up having to kind of wing it and keep adding a few more minutes and hope it doesn’t dry out.

Or you end up spending money to go grab something to eat if your guesstimate is off and the meat isn’t edible. You need to be able to reliably monitor how the meat cooks without hovering over it.

One thing you can do is get a proper food thermometer. You can try the kind that you stick into the meat and press a button and it gives you a reading. But you will have to poke the meat in various places to attempt to get an accurate reading.

The version above has a 200’ wireless range and if you step out of range, your phone will alert you. You’ll also get an alert if the cooking temperature falls out the parameters that you’ve set.

When the food is finished cooking, an alarm will sound on your phone. That’s because the internal sensors can tell when the meat reaches the correct temperature. You can monitor the food using Fahrenheit or Celsius and this monitoring can be set for more than one meat at a time.

The display has a large surface for reading at a glance. With the right Smart Bluetooth food thermometer, and I mean one with more than just one probe, you can say goodbye to underdone or overdone meat. Whether you grill outside or cook inside. You’ll save yourself a lot of frustration, not to mention give yourself time to do other things rather than constantly have to watch the meat cook.