When I received my Karcher WV50 PowerSqueegee window washer as a gift from our daughter, I think I must have gave her some funny kind of a look. You know the sort of look that questions, like, well, what am I supposed to do with this? 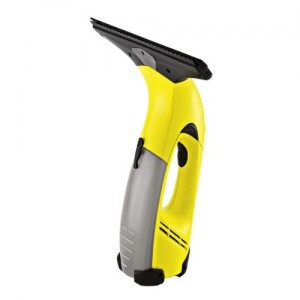 Let me explain, you see this present wasn’t wrapped up in a fancy box, it was just a yellow thing with some sort of blade on the end of it. She had bought it for herself and used it, but knew how much I hated cleaning my windows, tiles and the like, thought I might like one as well.

She had been so impressed with what this window cleaner did for her and knowing that I was about to embark on another house blitzing, thought it best that I had this cleaning aid at my disposal sooner rather than later.

Let’s delve a little deeper into the Karcher window cleaner review to learn just what it’s capable of.

The Karcher WV50 PowerSqueegee window washer is basically a hand held vacuum that you draw down the window and it soaks up all the excess cleaning liquid to leave a bone dry, streak free finish. After a short window cleaning demo from my daughter, I was well on my way to using this cleaning vac.

The cleaning process begins with using a bottle of spray solution of your choice to the surface being cleaned. (Other versions come with other options).

Next, you start to draw the cleaning vacuum tool down the window glass, this is where the magic happens. My first few attempts at drawing the vac down the window were a bit of a hit and miss and I was not fully satisfied with the end results. Once you fully understand that this tool draws up the liquid from the glass, a few practice strokes and everything starts to work a treat. 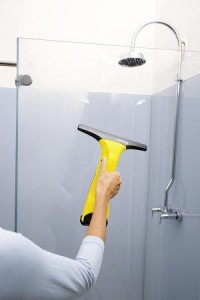 Don’t know what I was doing wrong with the first few strokes. Maybe not holding it against the glass properly? Now it’s making a fantastic job and when you touch the windows, they are bone dry and really free of streak marks.

The Karcher window cleaner indeed takes the hard work out of this laborious chore. Previously when I cleaned my windows, I would still find streaks and finished up polishing the glass with old newspapers. This worked for me with a lot of hard work, to get sparkling grease free windows. I’ve used this method all of my life until now. Time to move on I guess and get myself into the 21st century, newspapers indeed! Anyways, back to the cleaning process.

The image above shows the Karcher WV50 PowerSqueegee window washer being used to clean down the shower, read more about it here.

With the Karcher rechargeable window vac you can work with it for a period of around 20 minutes, which is long enough for anything I have to use it for. Maybe for some folk who have large houses, this time frame may not be long enough but you would probably want a break for coffee or lunch after 20 minutes. 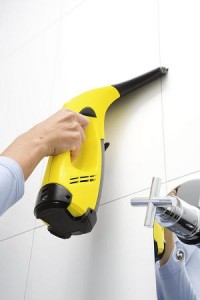 Simply switch on to recharge when you’ve finished using it and within a few hours it’s ready to go again when the Lithium-Ion batteries have been recharged. Even with these batteries included, I have found the little vac lightweight to use. The Karcher WV50 PowerSqueegee window washer also adds a bit of extra reach for getting to the top of windows. I would have had to use a step-up to reach previously.

There is an option to purchase a smaller head if you required that, for me the existing head does just fine. I could see perhaps the need for the smaller head, where you have tiny little window panels to be cleaned.

The video below will give you some ideas of what the Karcher WV50 Plus can be used for. You can use it in the bathroom/shower for cleaning the shower screen and tiles, cleaning up spills from a flat solid surface.

Should You Buy a Karcher Window Washer

Possibly this depends on your own personal requirement. If your quite happy cleaning the windows and bathroom/shower walls with a sponge or cloths and whatever you use at present, then why would you put out money on something you wouldn’t use. That doesn’t make any sense.

On the other hand, if you want to make these chores easier to do, then you might want to consider the Karcher WV50 Plus Vac.

For myself, I thank the day our daughter walked in the door with my window vac. For one, I won’t have to continue rubbing streaks from my windows with newspapers anymore, which suits me fine.

What would a Karcher window cleaner review be without providing some owner reports about this little window cleaner. Amazon use a star rating system for their customer reviews, with 5 stars rating being their top mark.

The review ratings works out at 4.2 from the 5 stars maximum and coming from 246 actual customers who have purchased this window cleaner. From those 246 reviewers 142 left the ful 5 stars.

Now you might think WOW, that’s lot of folk, but it’s nothing compared to the review figures seen on the Amazon Uk site. There have been 2,544 reviews left for this same model with ratings of 4.7 from 5 stars.

Possibly this product has been available for a lot longer over in the UK and Europe than in the USA. This would explain the higher number of the reviews found on the Amazon UK site.

Read the reviews and see the  discount for Karcher WV50 PowerSqueegee window washer at the link below.